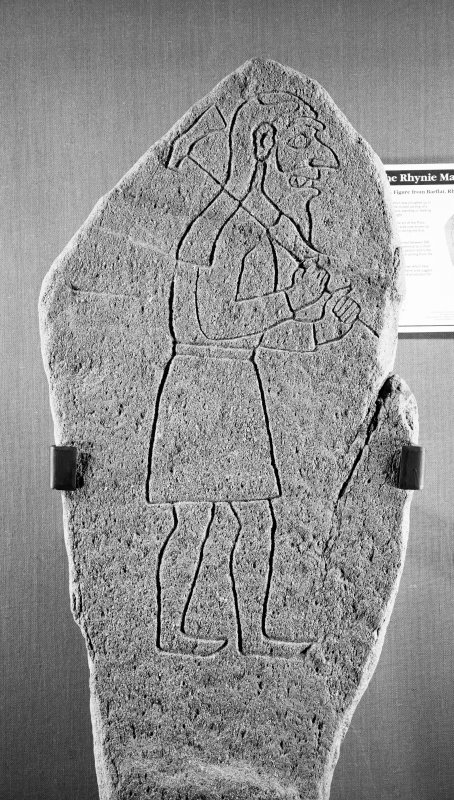 Rhynie Man is a Class 1 Pictish symbol stone. This means that it is pre-christian in its imagery. It shows a lone figure of a rather vicious looking individual with sharpened teeth and wielding a pole-axe of sorts. He is wearing a belted tunic and has what looks like a tonsure headdress. His facial features are exaggerated …could this be a mask?

In 2013 the Scottish Sculpture Workshop undertook a project to try and reconstruct the Rhynie Man axe from iron. https://scottishsculptureworkshop.wordpress.com/2013/07/02/iron-smelting-at-rhynie/

The outcome of that surmised that the axe was possibly weighted like a polo stick and weilded from a horse. In 2016 a possible socket for the stone was excavated slightly down hill from the Craw Stane. At the bottom of this socket was a cluster of bovine teeth. Could Rhynie Man have been a ritual figure that culled cattle? Was he a warrior clan leader, a priest like figure or more shamanistic? Or was he just the local butcher?

This stone was uncovered in 1978 by a local farmer while he was ploughing his field. This was the same field that the Craw Stane

is situated and the subsequent ‘Pictish Palace’ that has been discovered.

In 1983 the stone was moved from the farmers barn to the foyer of Woodhill House (Aberdeenshire Council Offices) in Aberdeen which saved it from being moved permanently to Edinburgh. The stone can be visited by the public within office hours at the Westburn Road offices.