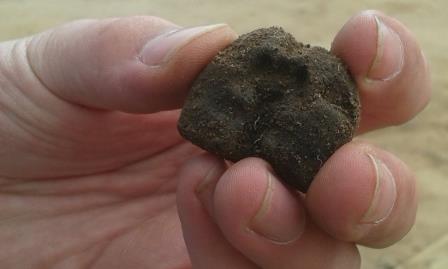 “It can be difficult to explain to people why we get so excited about moulds as sometimes they aren’t much to look at.  Almost all the moulds we have found have been clay two-part moulds. These types of moulds have to be broken to get out the metal object, which is why they are in fragments. Since they are ‘one use only’ objects, the clay is not fired as hard as when making pottery, usually, which also means they fragments can break down and decay more easily than pots. Despite all these issues, we have amassed a great collection of moulds. Most are for the shafts of pins, probably to hold clothing. The most exciting moulds show us the pin head, which helps us identify what type of pin it was. We have to be very careful with the moulds as too much handling or brushing can break or remove the detail. Once in a while we get a real gem without too much handling! The mould looks to be for an early type of handpin, one of those quite rare types of pins for early medieval Scotland.”  Megan Gondek – REAP

This is just one mould of an an unprecedented amount found at the Craw Stane site. They seem to have been making jewellery almost on a factory scale. Was this for their own use? Was it for trading? Who was it manufactured for and why in Rhynie? Where were the raw materials coming from?